Over the past two years, Museum visitors have been able to witness the gradual process of cleaning and restoring West’s painting in the Conservation in Action studio, and its original gilded wood frame has also been conserved. Painting and frame are reunited in an imposing new setting in Gallery 246, Artists on the Move in 18th-Century Europe with West’s altarpiece as the focal point for new discussions about how works of art and artists traveled across borders both intellectual and geographical.

Beginning in the summer of 2014, Benjamin West’s Devout Men Taking the Body of Saint Stephen was on view in a public conservation studio (Gallery 208), providing visitors an up-close, behind-the-scenes look at its conservation. Work on this very large altarpiece painting (at about 18-1/2-feet-tall and 10-1/2-feet-wide) and its carved and gilt frame took place over the next 18 months. Progress updates are posted below. (Responses to some of the questions posed by visitors in the comment book in gallery 208 and submitted to conservation@mfa.org can be found here.)

The first martyr of the Christian Church, Saint Stephen was stoned to death for his teachings. Many Catholic artists had depicted the saint’s violent end, but West was working for a Protestant church hierarchy that deplored sensationalism. To promote ideals of compassion and faith, he chose a gentler subject—the sorrow and devotion of Stephen’s followers as they laid his body to rest. West’s composition borrows from scenes of the lamentation and entombment of Christ, visually linking Stephen’s martyrdom to Christ’s sacrifice. He painted this monumental canvas in 1776 for the Church of Saint Stephen, Walbrook, in central London, designed by Christopher Wren in 1679 and famous for its elegant interior. Originally placed prominently at the east end of the church behind the altar, the painting was moved to the north wall in 1852, and eventually removed altogether and sold.

West was one of the most important American painters of the eighteenth century. Born near Philadelphia in 1738, he traveled to London in 1763 and stayed there for the rest of his life. He became a leading figure in London’s art world and a founding member of the Royal Academy, serving as its second president. West explored both the moral grandeur and severe contours of the neoclassical style and the emotional drama of Romanticism. An innovative artist, he transformed contemporary history painting by presenting his heroes in modern dress. West was also an important teacher, and his studio became in effect an art school, particularly for aspiring American painters, among them John Trumbull, Charles Willson Peale, Gilbert Stuart, and Thomas Sully. 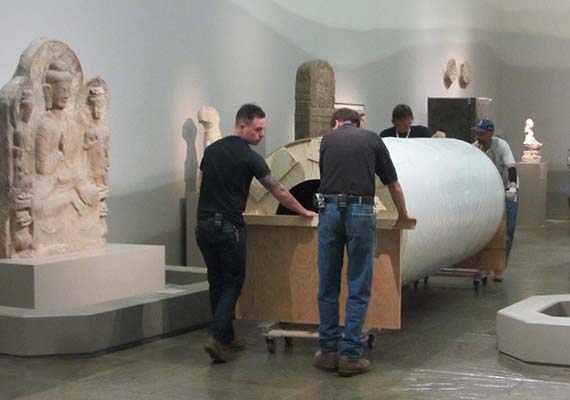 The rolled painting is carefully moved through the galleries on its way to the public conservation studio.

Because Saint Stephen is so large, it needed to be taken off its stretcher and rolled for transport to the Museum. The painting will later be re-stretched onto a temporary “working” stretcher. A full examination will then follow, so that conservators may understand and document all aspects of the painting’s condition. This information will guide conservators in devising a conservation strategy.

Why is the altarpiece undergoing conservation?
All paintings need care to keep them looking their best. As soon as a painting is finished it begins to age. In addition to the effects of natural aging, a painting may also suffer damage during its lifetime. The principal goal of any conservation treatment is to keep an artwork in as close to its original condition as possible for as long as possible.

The conservation treatment of Saint Stephen will focus on structural treatment, which is aimed at stabilizing the large painting, and aesthetic treatment, which will focus on how the painting currently looks. The altarpiece is in relatively good condition given its age. Although there are no major areas of damage, there are several small tears to the canvas support as well as small areas of damage along the canvas edges and the vertical seam. These damages are currently masked by thickly and inelegantly applied retouching and overpaint. A heavy accumulation of surface grime and discolored and degraded varnish layers obscure West’s brilliant colors and make his darker passages difficult to see. The goals of the conservation treatment are to stabilize the painting and to improve its appearance in a manner that is appropriate to the historic and artistic integrity of the altarpiece.

See below for updates as conservation progresses.