Her vision, her voice across a century of art

“Women Take the Floor” challenges the dominant history of 20th-century American art by focusing on the overlooked and underrepresented work and stories of women artists. This reinstallation—or “takeover”—of Level 3 of the Art of the Americas Wing advocates for diversity, inclusion, and gender equity in museums, the art world, and beyond. With more than 200 works drawn primarily from the MFA’s collection, the exhibition is organized into seven thematic galleries. Interactive programming creates a dynamic space that welcomes visitor participation, and new rotations of artwork introduced over the run of the exhibition ensure that new voices and perspectives are available on each return visit. 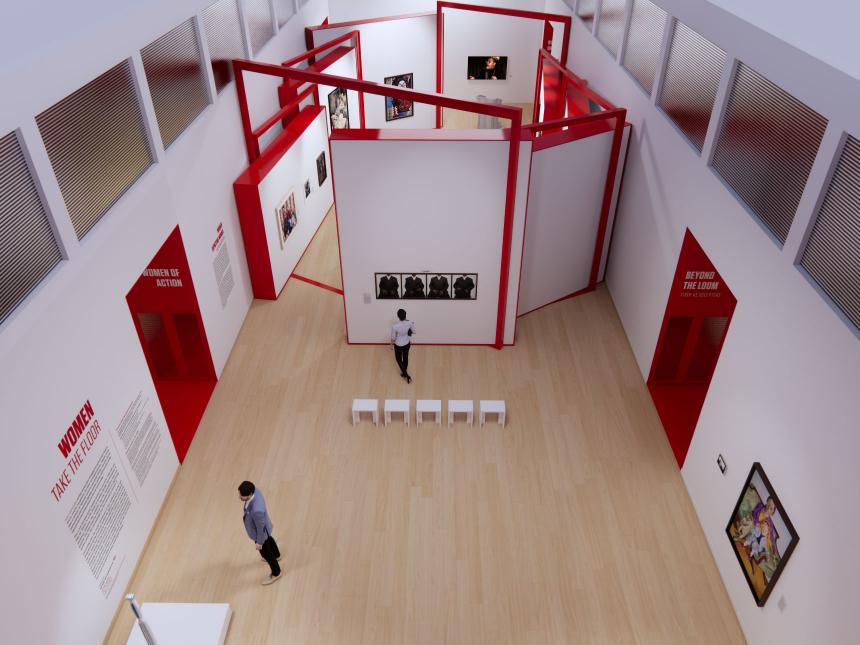 Engage with a selection of artworks, access educational tools for families and students of all ages, and add your voice. The virtual tour focuses on the central gallery of the exhibition. You can also catch a glimpse into some of the other galleries.

We are working to make the tour accessible by keyboard navigation and to screen readers.

In the decades following the campaign for women’s suffrage, a greater number of women successfully pursued careers as professional artists and designers. Yet the road was not easy—nor was it open to all. This gallery features well-known artists like Georgia O’Keeffe, Marguerite Zorach, and Loïs Mailou Jones, as well as women artists whose importance is under-recognized.

“No Man’s Land” is devoted to artists who have reimagined the metaphoric possibilities of landscapes, often through the use of symbols that allude to female experiences. Works in this gallery span the 20th century and include a recently acquired painting by Luchita Hurtado as well as paintings by Georgia O’Keeffe and Loren MacIver.

“Beyond the Loom: Fiber Art as Sculpture, ”which was on view in this gallery from September 16, 2019, to December 8, 2020, featured the work of early pioneers of fiber art who radically redefined textiles in the 1960s and ’70s.

The central space features images of women, created by women. The objects range across time and place, as well as social, political, and cultural contexts, to represent the diversity of approaches women have taken in depicting one another. Highlights include such celebrated paintings as Loïs Mailou Jones’s Ubi Girl from Tai Region and Frida Kahlo's Dos Mujeres (Salvadora y Herminia). Voices from the community play a pivotal role in this gallery, offering a range of perspectives through interpretative labels, performance, and other programming. In a video, Porsha Olayiwola, the current poet laureate of the city of Boston, performs what is the suffrage movement to a blk womyn?: an anthem, a poem specially commissioned as a response to the exhibition.

Building on recent scholarship, this gallery recognizes the contributions of Joan Mitchell, Grace Hartigan, Helen Frankenthaler, Elaine de Kooning, and others to the formation and expansion of action painting of the mid-20th century, a movement typically credited to their male counterparts.

This installation presents more than 30 works made during a pivotal period when women began pursuing photography as a profession in larger numbers than ever before. Organized thematically, the photographs tackle a range of subject matter—demonstrating how women photographers represented themselves and each other, captured both the natural world and the domestic sphere, and took to the streets to document current events. In addition to well-known American photographers such as Diane Arbus, Judy Dater, Nan Goldin, Annie Leibovitz, Sally Mann, and Cindy Sherman, the installation highlights recently acquired works by underrecognized photographers working in Argentina, Mexico, Chile, and Canada, including Adriana Lestido, Yolanda Andrade, Paz Errázuriz, and Lynne Cohen.

“Women Publish Women: The Print Boom,” which was on view in this gallery from September 16, 2019, to April 25, 2021, celebrated Tatyana Grosman, June Wayne, and Kathan Brown, three entrepreneurs who founded printmaking workshops in the late 1950s and ’​60s and played an underappreciated role in the revitalization of American printmaking.

Women and Abstraction at Midcentury

This gallery takes an expansive look at abstraction, exploring how women artists reshaped the natural world for expressive purposes in a wide range of media including paintings, prints, textiles, ceramics, furniture, and jewelry. Among the artists featured in this space are painters Carmen Herrera, Esphyr Slobodkina, and Maud Morgan and designers Greta Magnusson-Grossman and Olga Lee, as well as Claire Falkenstein, Laura Andreson, Margaret de Patta, and others who contributed to the development of the studio craft movement.

The MFA and Tamar Avishai, the Museum’s first podcaster-in-residence, present five episodes released every Sunday in March about works of art in “Women Take the Floor.”

Generously supported by the Carl and Ruth Shapiro Family Foundation.

Additional support from the Jean S. and Frederic A. Sharf Exhibition Fund, and the Eugenie Prendergast Memorial Fund.