The embroideries of colonial Boston girls and women have long been treasured family possessions and are now much sought after by collectors. The charm and craftsmanship of the Adam and Eve samplers, pastoral pictures with leaping stags and galloping hunters, as well as crewelwork bed hangings and delicately embroidered baby caps bring to mind a warm domesticity; however, as a group they also reveal much about the lives of Boston women and their role within colonial society.

During the eighteenth century, many Boston families schooled their daughters in a range of female accomplishments including dancing, deportment, music, painting on glass, and, of course, needlework. In advanced needlework lessons, girls first worked samplers but then quickly passed on to the more decorative embroidered pictures, overmantels, and coats of arms. These pictorial embroideries became cherished family possessions and served as symbols of the family’s prosperity and gentility. This exhibition will explore the pictorial embroideries popular in eighteenth-century Boston and include examples of the pastoral works probably imported from London as well as examples drawn by talented Boston teachers, engravers, and upholsterers. While tent stitch pictures embroidered with wool and silk predominated, some girls embroidered in silk on silk. This form became more popular in the third quarter of the eighteenth century and is associated with the teacher and milliner Elizabeth Murray, whose portrait by Copley will be featured in the show. Her protégés, Janet Day and the Cummings sisters, continued the tradition, and exceptional work by their students survives. Loans from several museum and private collections in New England and the mid-Atlantic will be featured in the show. 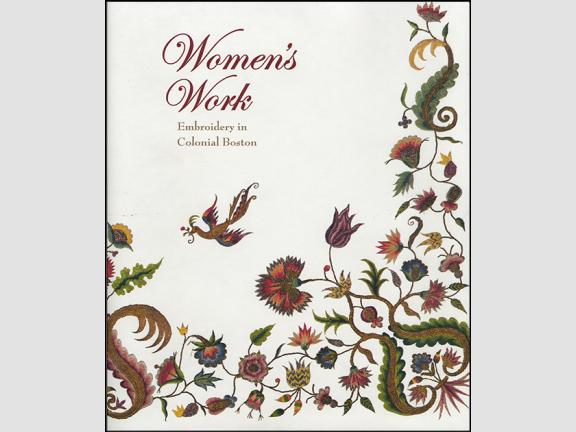 Women's Work tells the stories of six women and how needlework shaped their lives in the colonies' most important port city. From decidedly domestic...