Treatment of Hanabusa Itchō’s iconic masterpiece, The Death of the Historical Buddha (Nehan zu) began in the spring of 2016 behind closed doors. In August 2016, the Japanese hanging scroll, last treated and remounted in the 1850s, moved into gallery 178, allowing the public to observe and interact with conservators as treatment continued. This rare 16-foot-tall masterpiece of the Edo period, which has not been on view in more than 25 years, is one of the most important Buddhist paintings of its time. In partnership with colleagues from the Smithsonian’s Freer Gallery of Art, this project gives the conservation team an opportunity to engage with visitors in the gallery and field questions as they work on the painting.

To learn more, view the related lecture, “Preserving Oversize Asian Paintings: What It Takes,” presented at the MFA on December 11, 2016.

Hanabusa Itchō (1652–1724) was not only a painter, but also a poet and songwriter, labeled an “artist-rebel” and “enigmatic anti-hero” because he was sent into exile for more than ten years (his crime unknown, though rumors and speculation abound). Itchō painted Nehan zu, or parinirvana (nirvana after death), in 1713, after his exile. It depicts the passing of Buddha from this earthly realm into the state of perfect peace. (The Japanese word nehan is derived from the Sanskrit nirvana, the state of a spirit without worldly desires, or enlightenment.) Traditional nehan zu are important ritual objects that are displayed on the anniversary of the Buddha’s death, or Nehan-e (Day of Buddha’s Nirvana), celebrated on the fifteenth day of the second month of the lunar calendar (in March by today’s Gregorian calendar). Throughout Japan, Buddhist temples conduct public religious ceremonies and display these monumental scroll paintings depicting the event. 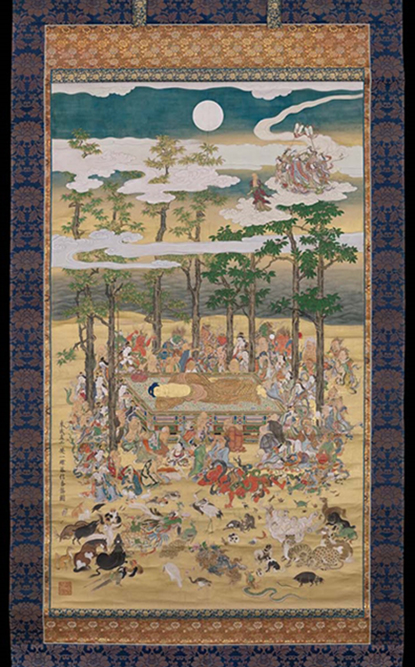 Itchō’s painting, according to two inscriptions found on the reverse of the hanging scroll, was remounted in 1850 and dedicated to a Zen sub-temple, Ginsoin, which no longer exists but would be in present day Atago district of Minato ward in Tokyo. The scroll had probably been shown annually at the temple during Nehan-e for more than 150 years. It must have been treasured by the temple, for it has elaborate gilt fittings carved with mythical lions (see image below), signed by Yokoya Sōmin, the famed metalworker and a close friend of the artist.

Best known for his satiric scenes of everyday life, Itchō enlivens the standard iconography for nehan zu composition through a masterful handling of the individual figures and grieving members of the animal kingdom. A colorful palette comprised of expensive inorganic pigments, such as azurite (Buddha’s blue hair) and malachite (green leaves of the sal trees), is used to depict Buddha’s passing as witnessed by Bodhisattvas and Buddhist monks, Hindu deities and guardians who were converted to the Buddha’s teaching, men and women of every class, as well as a multitude of animals and mythical beasts. As seen in the detail below, some are portrayed with a solemn serenity, while others are shown weeping inconsolably. The sal trees blossom out of season, and the Buddha’s mother, Māyā, descends with her entourage from the heavens to witness the event. There is also a red figure at the lower right, who stares directly at the viewer as he pulls clumps of his hair out in despair. 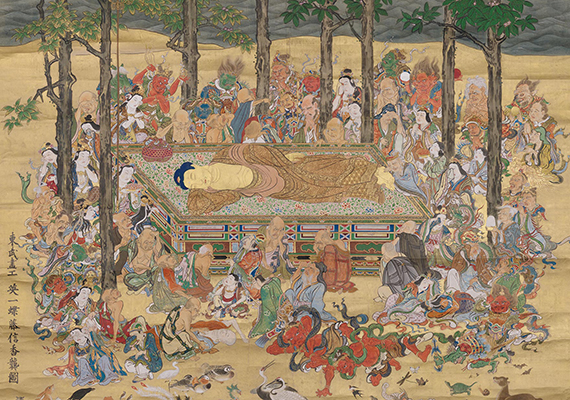 The painting is executed on medium-weight Japanese gampi paper. Given the size and age of the hanging scroll, it is in remarkable condition. There are numerous creases and tented cracks (see detail below) in the painted surface but with little loss of pigment and no losses in the original paper support of the painting. There are, however, areas of delamination between the papers lining the back of the scroll. These concerns will be addressed during the course of the treatment.

The elaborate process to conserve Nehan zu will also involve completely dismantling and reassembling the scroll. Some parts of the original mount can be reused, while others deemed too damaged will be replaced. The large patterned blue silk used for the outermost border of the mounting will be replaced with a custom woven reproduction made to order for this project by traditional weavers in Kyoto. All paper linings that support and secure the painting into its hanging scroll mount will be replaced. The new reproduction silk will also be lined with papers of appropriate weight. The gilt metal fittings along the top stave and the elaborately carved end-knobs with mythical lions used to cap the bottom dowel will be preserved and reused.

Reassembly will aim to achieve a harmonious balance between the painting, its surrounding silks, and the paper linings. The process to reassemble all the parts of the work into a hanging scroll format needs to be done in one long day, after which the entire hanging scroll will be lined with another paper layer for support. The scroll can then be safely placed face up on a drying board for several weeks, and treatment of any pigment losses can proceed.

“Conservation in Action: Preserving Nirvana” is generously supported by The Sumitomo Foundation.