In March 2013, conservators began treatment of Claude Monet’s La Japonaise (Camille Monet in Japanese Costume), carrying out the work on view to the public in gallery 208 of the Behrakis Wing. The painting, dated to 1876, was cleaned and stabilized after being on continuous display for much of the past fifteen years. Check the progress updates posted below to learn about the treatment process.

Although he is best known today as the father of Impressionist landscape, Monet painted a number of large-scale portraits early in his career. La Japonaise was the last, a picture of his first wife, Camille, in Japanese costume. When first exhibited at the Impressionists' second exhibition in 1876, the painting attracted praise and ridicule in almost equal proportions. Conservative critics called the figure a "great doll, with nothing human about her face," a "demimondaine," a "two-headed Chinese," and a "scarlet machine." More open-minded observers recognized Monet's bold use of color, his confident brushwork, and his playful references to Japanese art. Everyone seemed to agree that there was something unusual about the work, which the great progressive critic Emile Zola described as "prodigious in color and in strangeness."

La Japonaise—literally "the Japanese woman"—was not Monet's original title for the painting. He showed it in 1876 as Japonerie, a recently coined word describing Western works that imitated Japanese objects. Monet went out of his way to present his naturally dark-haired wife as a blonde parisienne, at once disguising her identity and emphasizing her difference from the exotic objects that surround her: an elaborately embroidered kimono, a flock of sixteen paper fans, and what appears to be a tatami mat underfoot. The folding fan in Camille's hand, as many were quick to point out, is decorated in red, white, and blue, the colors of the French flag—an added reminder that this woman is less "La Japonaise" than "La Parisienne." 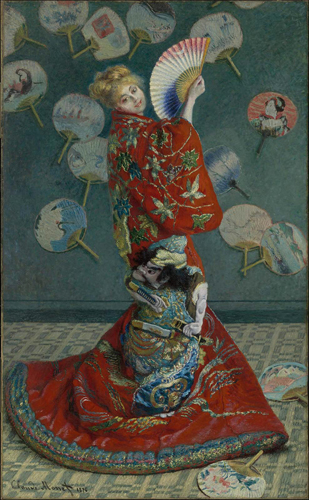 Monet participated in the widespread enthusiasm for Japanese art and culture that swept Europe in the 1860s and 1870s, a phenomenon known as japonisme. With the opening of Japan’s ports to Western trade in 1854, Japanese textiles, porcelain, and other luxury goods flooded the European market, along with distinctive, brightly colored woodblock prints depicting everyday life in Japan. Monet was an early and prolific collector of these prints, and also owned several Japanese theatrical costumes, in one of which Camille seems to have posed for this picture.

The composition itself, with its flirtatiously twisting central figure and its emphasis on the lively pattern of the robe, indicates Monet’s admiration for such prints illustrating courtesans and actresses. But it also betrays the painter’s awareness of the contemporary French fashion for suggestive pictures of European models in Japanese dress. By the mid-1870s, such works had become a staple of the Salons, the state-sponsored annual exhibitions from which avant-garde artists’ work was often excluded. It’s possible that Monet, deeply in debt at the time, chose the subject in hopes of attracting a rich buyer.

La Japonaise is undergoing treatment for two reasons. First, the appearance is compromised by materials on the surface: an overall synthetic coating; patches of a very old natural resin varnish below; and residues of wax concentrated around the paint cracks. The varnishes create shiny and matte patterns which do not consistently relate to the original paint textures and gloss, while the wax imparts a mistiness. The aim is to remove these materials and hopefully regain clarity in the individual areas of color and the image as a whole.

The second problem is local. Some areas of red, dark blue, and maroon paint are quite fragile. They are extensively cracked, sometimes lifted along the edges, and have had small losses over a long period of time. As the varnishes and wax are eliminated, conservators will simultaneously work to make these areas more secure.

The treatment, expected to take a full year, will proceed one small area at a time in order to keep the paints safe. Conservators will often work with their view magnified through a microscope and the painting oriented flat or on an angle on a custom designed table. It may be difficult to assess the results with the naked eye, as the painting will not appear dramatically cleaner or brighter. But while changes will be subtle, the conservation process will ultimately bring visitors closer to Monet's work.

This project was made possible with support from the MFA Associates/MFA Senior Associates and NHK/NHK Promotions.