In May 2013, conservators started work on the door of a minbar, or pulpit, in gallery 208 of the Behrakis Wing. The doorway entered the Museum collection in 1877, but this was the first comprehensive study of its construction and manufacturing techniques. Learn about discoveries made and work done in the progress updates posted below.

This exquisite work was made in the late fourteenth century in the region now known as Egypt. Originally it would have stood in a mosque and opened onto a short flight of stairs leading to a platform. During the Friday prayer service, an imam, or Islamic leader of worship, would have passed through the doors and climbed to the top of the stairs to deliver the sermon.

An inscription on the bottom panel of the door suggests that at least part of the door was made in Cairo for Sultan al-Zahir Barquq, ruler of the Mamluk sultanate from 1382 to 1399. Most of the door seems to be original, but some elements have clearly been altered. There were once two doors that opened inward inside the frame, but now there is a single panel decorated with two 16-pointed stars constructed out of plaques of carved ivory.

At some point, Sultan Barquq’s minbar seems to have been disassembled and some of its parts used to create the object in its current configuration. Unraveling the mystery of the doorway is the goal of this project. 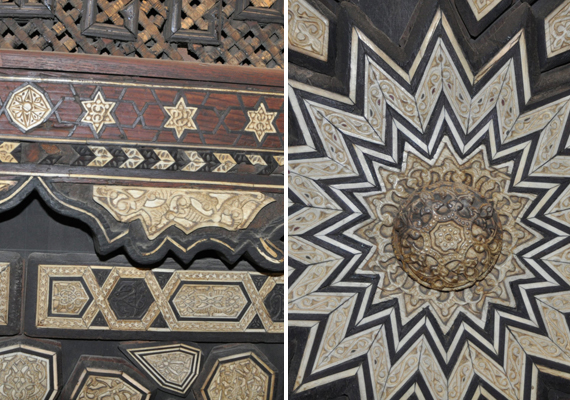 The minbar door is being conserved in preparation for a traveling exhibition, giving conservators a long-awaited opportunity to clean, stabilize, and study this magnificent example of Mamluk woodwork. Examination of the minbar and its individual components is underway. Various techniques, from X-ray, wood sampling, and Carbon-14 dating, to ultraviolet and infrared examination of the surface and components, will help answer the many questions about this piece.

How is the door frame constructed and joined together?
The joints of the main door frame along with individual components will be X-rayed to determine the joinery techniques used in the construction. This can also be helpful to determine if the minbar has been dismantled or restored or modified at any time in its history.

What type of glue or adhesive was used to hold the inlay in place?
Small samples will be taken and analyzed in the Museum’s scientific research laboratory using a range of analytical techniques.

How do the ivory pins, which provide a mechanical attachment method for the larger ivory elements, function?
This will be better understood during their stabilization, as several will need to be removed during conservation to allow them to be securely reattached.

What about the very small colored elements found on some of the decorative ivory? Are they colored inlays or a colored fill material?
Scientific analysis will be able to help answer these questions.

What materials were used to construct the frame, the decorative inlay, and the incised or carved elements?
Very small samples of the woods and ivory will be taken and examined under high-powered magnification to look at the cell anatomy, which will allow their identification.

How old are the minbar’s individual components? What are the dates of individual parts of the minbar?
Carbon-14 dating techniques can determine if all elements of the minbar are from the same period or whether some parts may be later additions.

Were the individual elements now attached to the central board in the doorway repurposed from the original minbar?
A conclusion may be reached after examination of the construction and manufacturing techniques. 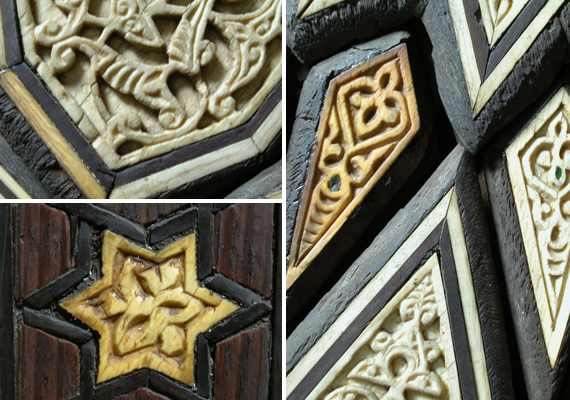 As would be expected for a large fourteenth century object with complex construction and decorative details, the minbar is in need of significant conservation treatment to stabilize and clean it prior to exhibition. The treatment will involve several phases:

• Overall structural stabilization of the door frame, with a special focus on the stability of the top decorative or cornice elements.

• Removal of the central board to which individual decorative elements have been attached. Many of these elements are loose and need to be reattached.

• Stabilization of any lifting and loose inlay. This is a long and complex part of the treatment, and a variety of different techniques will be used depending on the nature of the elements being stabilized.

• Overall surface cleaning to remove surface dirt. Several trials to test different cleaning systems have been carried out over the last few months, and a variety of different techniques, from simple vacuuming to the use of eraser crumbs, will be utilized to clean the delicate surface.

• Possible replacement or compensation of small areas of decoration that have been lost and are disrupting the overall visual unity of the minbar.

• Inpainting of any minor losses, with the aim of unifying all elements of the minbar. 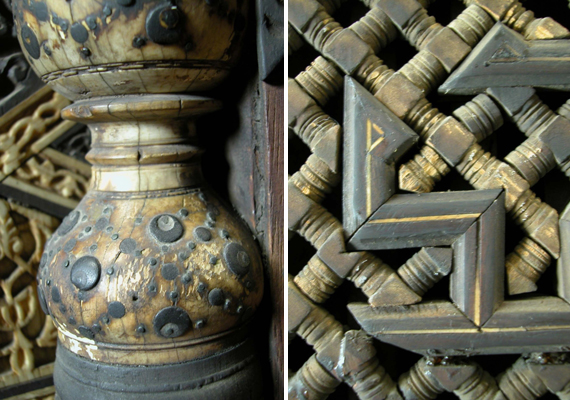