In the summer of 2011, conservators began treatment of two Etruscan sarcophagi in gallery 117 of the Behrakis Wing. Conservation work is normally conducted behind the scenes. However, given the size, weight, and fragility of these objects, a studio space was constructed around the sarcophagi in the gallery, allowing the public to see the treatment process from beginning to end. See the progress updates posted below.

The ancient Etruscans prepared extensively for the afterlife, furnishing elaborate tombs and ordering handsome coffins or sarcophagi. The two sarcophagi undergoing conservation treatment come from the tomb of the Tetnies family in Etruria, located in a necropolis or “city of the dead” in Vulci in central Italy. Discovered in the mid-1840s, they came to Boston in the 1880s. The Museum purchased the wider sarcophagus in 1886. The narrower one was acquired by the Boston Athenaeum, but placed on long-term loan at the Museum until its purchase in 1975.

Inscriptions on the coffins reveal the names of those once buried within—parents in one, their son and his wife in the other. Both couples are featured in loving embrace on the lid. The commemoration of an affectionate marriage for eternity reflects a major difference between ancient Greek and Etruscan societies—namely, the more equal participation of women in Etruscan rituals and life. But the intimacy of these couples, their tender gazes, and nudity, seen below the coverlets on their marriage beds, are unprecedented in Etruscan art. 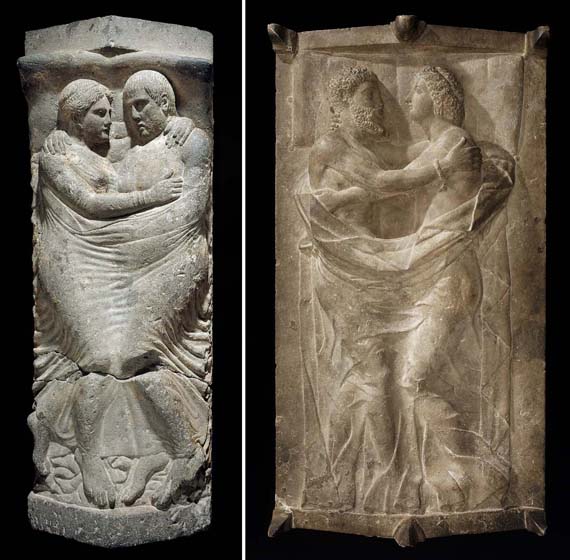 The parents’ sarcophagus (above, left), carved in a local volcanic stone, shows the more naturalistic character of Etruscan art. The middle-aged man and his wife press close together, their feet poking out beneath the covers. A long relief on the side depicts their wedding procession, with the couple at the center. The son’s sarcophagus (above, right) shows the influence of Greek art and styles in his beard and in his wife’s hairstyle, as well as in their more idealized appearance and pose. The sides of this sarcophagus are carved with less personal scenes, such as Greeks fighting Amazons and horsemen attacking armed men on foot. While some have suggested a Greek artist may have made the sarcophagus for the son and his wife, it is evident that both couples wanted to remain in eternal embrace.

The two sarcophagi have been on display at the Museum since 1887, and on view in gallery 117 since the early 1960s. Unfortunately, cracks and breaks run through the bases and lids, old repairs and breaks threaten their stability, and the weight of the lids exerts excessive pressure on the broken bases. The surfaces of both are also blackened from years of exposure and worn from repeated touching and rubbing.

Conservators, structural engineers, scientists, and other specialists are working together to improve both the stability and the appearance of the sarcophagi. Treatment will be performed using nondestructive methods which will not hinder any future analytical work or structural repair that may be necessary. Breaks and fissures will be supported or repaired with materials and adhesives such as steel, carbon fiber rods, and reversible polymers.

Before treatment may begin, industrial X-radiography will first be employed to locate any metal pins or other repairs and to identify unstable cracks. The lids will be removed and the components of the sarcophagi maneuvered using a system of gantry rigging and steel supports. Steel pallets will be fabricated to support the lids and bases to ensure that they can be handled and displayed safely. To reduce stress on the damaged bases, the lids will be supported on custom-made internal armatures hidden within the sarcophagi.

The two sarcophagi were carved of different stones, but having been exposed to the same burial conditions for about the same period of time, it is possible to compare their deterioration to better understand how they were made. At first glance, the nature of the two stones suggests that different techniques of carving and decoration were used in antiquity. As cleaning progresses, further study will reveal more. Minute cross-sections of the stone as well as the thick archaeological deposits on the surfaces will be examined through a microscope, and conservators will look for the remains of any original paint or gilding that may be present underneath the dirt and other build-up. Because surface encrustations acquired over long periods of burial can provide a rich resource for future research, perhaps yielding information about burial conditions, the techniques used to decorate the sarcophagi, or handling and burial processes, these archaeological surfaces will be preserved. However, dirt acquired in the museum environment will be removed through various methods, including the use of lasers and the application of absorbent materials containing cleaning solutions to the stone.

Through this treatment, not only will the structural stability of the sarcophagi be improved, but their appearance will be significantly brightened. Conservation will allow the beautiful naturalism of the carving to come to life, and highlight the different characters of the two stones.

Generous support for this project provided by the Leon Levy Foundation.