Carved from one block of Egyptian alabaster, the seated statue of Menkaura (Mycerinus) was recovered in 1907 by the Harvard University-Boston Museum of Fine Arts Expedition in the ruins of the king’s temple at the base of his pyramid, the third and smallest at Giza. The statue had been broken apart in antiquity and the pieces scattered about the site. Fragments from the torso and throne base were found in January 1907. Two months later, the full head, in nearly perfect condition, was excavated from what proved to be a robber’s trench. 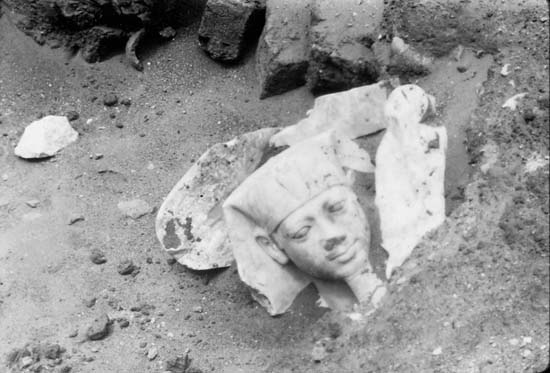 When the fragments arrived at the Museum in 1909, the first installation omitted the torso. Since then, the sculpture has undergone various stages of restoration. In 1911, additional torso pieces were added, and an abstract restoration of the missing torso elements was attempted. In 1925, the artist for the expedition, Joseph Lindon Smith, connected the head, chest, and throne base. The full restoration that visitors see today was completed in 1935 by Smith, assisted by SMFA student Charles Muskavitch, and executed in the second floor Gardiner Martin Lane Gallery (gallery 207), where the sculpture remained on exhibit until early November 2010. 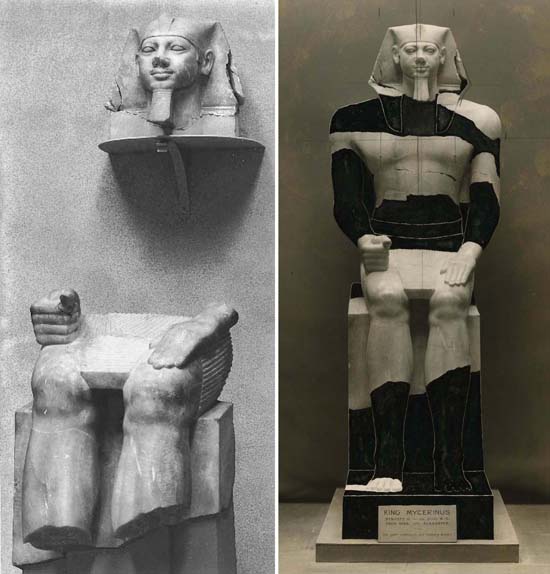 The effort to prepare the statue for its relocation to a new gallery on the first floor took more than two years. The object required sophisticated examination and stabilization, a process which involved conservators, conservation engineers, designers, curators, facilities staff, architects, as well as outside consultants.

Since no documentation was available on methods and materials used during the previous reconstruction, a company specializing in industrial testing was employed to conduct Gamma radiography to visualize the interior of the sculpture and the extent of modern materials. Studies revealed that the large and heavy original stone fragments were not securely joined by pinning. Losses had been filled with an agglomerate of plaster, metal tubes, and other materials. The base of the throne consisted of solid brickwork built on top of a cement base. Past reconstruction efforts could not have anticipated that relocation would ever be necessary, and the result was a complex, three-dimensional patchwork of ancient and modern materials. The eight-foot-tall sculpture is therefore not only fragile but also extremely heavy, with an estimated weight of more than 4,000 pounds.

Relocation and the associated exposure to vibrations seemed to pose insurmountable problems. However, with assistance from an engineering company, a mechanical support and moving apparatus was developed which encompassed stainless steel braces set into the brick throne, numerous threaded rods to tie parts of the modern reconstruction together, as well as a steel base. Once the sculpture was stabilized, screw jacks allowed slow lifting from the gallery floor and insertion of the custom-made palette to which temporary outriggers and wheels were attached. 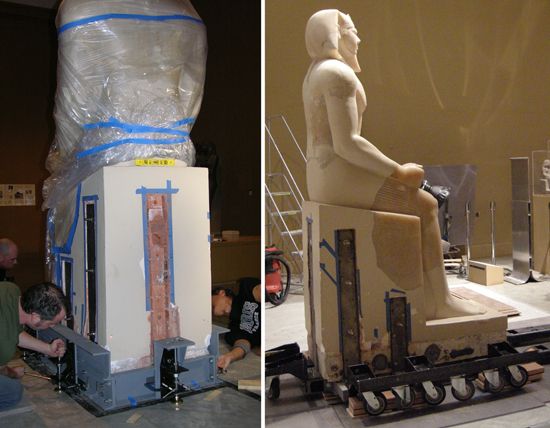 Taking into consideration elevator weight limits and the dimensions of door openings, staff members carefully moved the colossal statue through the Museum over the course of an entire day. With about an inch to spare above the head, the sculpture was rolled through the Shapiro Family Courtyard’s glass doors and into its new home in the Egyptian Old Kingdom gallery (gallery 108). 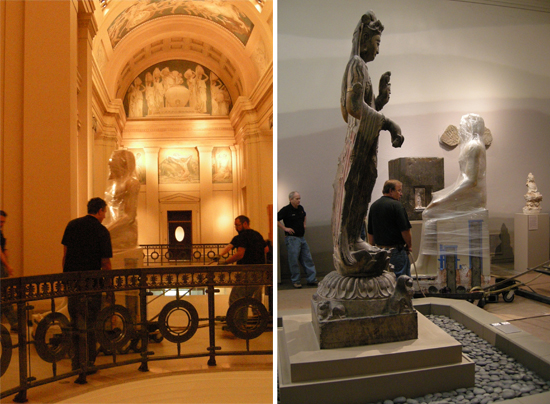 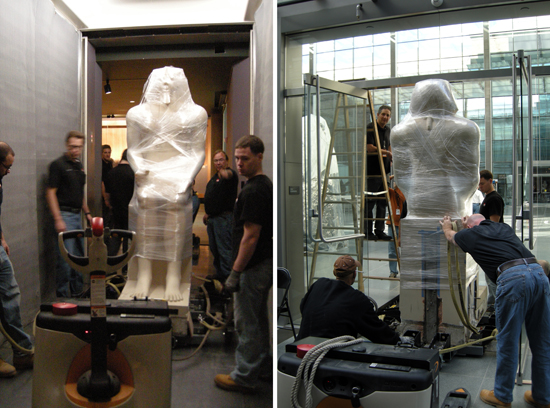