On September 22, 2011, the Museum of Fine Arts and the Republic of Turkey finalized an agreement transferring ownership of the 2nd century, Roman Imperial sculpture Weary Herakles (MFA accession no. 1981.783) to the Turkish government. 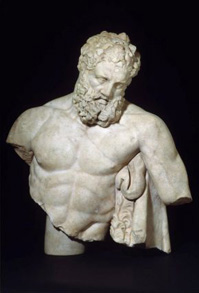 The MFA acquired a half-interest in the sculpture, which shows the head and torso of the mythological hero Herakles, in 1981 from a dealer in Frankfurt, Germany. In 1990, while the object was on loan to the Metropolitan Museum of Art in New York, a scholar noted its similarity to the bottom half of a Herakles sculpture that had been excavated in 1980 in Perge, Turkey (held by the Antalya Museum, Turkey). Shortly thereafter, the Turkish government claimed ownership of the MFA sculpture. In 1992, casts were made of the MFA torso and the sculpture excavated from Perge. The two pieces fit together, and it was determined that they originally formed one sculpture which was broken apart.

When and where the torso was excavated has not been documented. According to information provided by the dealer who sold the Weary Herakles to the MFA, his mother acquired it around 1950 from a German dealer, who had bought it from a European private collection. This account has never been verified.

Discussions with Turkey began in the early 1990s regarding a solution that would allow the two halves to be reunited. After the MFA acquired full interest in its part of the sculpture in 2004, these discussions resumed. In 2011, the MFA deaccessioned the Weary Herakles for transfer to the Turkish government, and the object returned to Turkey.

Museum of Fine Arts, Boston, and Turkish Republic Reach Agreement for Transfer of Top Half of Weary Herakles to Turkey

BOSTON, MA (September 23, 2011)—Last evening, an agreement between the Museum of Fine Arts, Boston (MFA), and the General Directorate for Cultural Heritage and Museums of the Ministry of Culture and Tourism of the Republic of Turkey was signed, transferring ownership of the top half of the 2nd-century AD Roman Imperial marble sculpture Weary Herakles to the Turkish government. Malcolm Rogers, Ann and Graham Gund Director of the MFA, and Murat Suslu, Director General for Cultural Heritage and Museums, signed the Memorandum of Understanding at the Museum. The agreement acknowledged that the MFA acquired the object in good faith and without knowledge of any ownership or title issues. It also provided for the transfer of the object, which took place after the signing.

Weary Herakles is a Roman statue (Hadrianic or Antonine Period, 2nd century AD) made of marble and is a copy of a famous bronze statue sculpted about 330–320 BC by the Greek master Lysippos of Sikyon. It depicts the mythological hero Herakles (Hercules to the Romans), son of the Greek god Zeus and the mortal Alcmene, fatigued by his many labors. The version that the MFA acquired is close to a type that was popular with ancient artists and is best exemplified by a colossal work at the Naples Archaeological Museum. The bottom half of the statue is at the Antalya Museum in southwestern Turkey.

“The Weary Herakles is a great work of art and we believe that it should be back in Turkey where it can be made whole once again,” said MFA Director Rogers. “We are pleased with this significant resolution.”

In addition to Murat Suslu, General Director for Cultural Heritage and Museums, who signed the document on behalf of the Republic of Turkey, other Turkish representatives who attended last night's meeting included Hakan Aytek, Head of the Culture Department at the Turkish Foreign Ministry; Yakup Harmanda and Zeynep Boz, specialists with the Ministry of Culture and Tourism; Mustafa Demirel, Director of the Antalya Museum; Mesut Ozbek, Attache for Cultural Affairs of the Turkish Embassy; and Murat Lutem, Consul General of Turkey to Boston.

"We are very pleased to have received the Weary Herakles from the MFA. We believe that it is important that such objects should be returned to their homeland and displayed there. I hope that the return of the statue will enhance our cooperation with the MFA," said Cultural Heritage Director General Suslu.

The MFA acquired a half-interest in the sculpture in 1981 from a dealer in Frankfurt, Germany; the other half-interest was owned by collectors Leon Levy and Shelby White. The work was accessioned into the MFA’s collection at the end of 1981 and first displayed in 1982. It has been included in two exhibitions: Glories of the Past: Ancient Art from the Shelby White and Leon Levy Collection, presented in 1990–1991 at the Metropolitan Museum of Art in New York, and Sculpture in Prints, on view February–August 2007 at the MFA.

In 1990, when the statue was on loan to the Metropolitan Museum of Art’s exhibition, a scholar noted its similarity to the bottom half of a Herakles sculpture that had been excavated in 1980 in Perge, Turkey (the bottom half held by the Antalya Museum). Shortly thereafter, the Turkish government claimed ownership of the sculpture. In 1992, the Museum conducted scientific testing on Weary Herakles, and casts were made of the MFA torso and the sculpture excavated from Perge. The two pieces fit together, and it was determined that they originally formed one sculpture, which was at some time broken apart. When the break occurred and when and where the torso was excavated have not been documented.

The MFA and Turkey have been in discussions since the early 1990s regarding how the two pieces might be reunited. After the Museum acquired full interest of the top half of the sculpture in 2004, it contacted Turkey regarding a resolution, and yesterday (September 22, 2011) the MFA’s Board of Trustees voted to deaccession the sculpture.

The MFA has been a leader within the museum community in sharing objects in its collection and their provenance (history of ownership) worldwide through its collection database at www.mfa.org. The Museum has also worked to create opportunities for extended cooperation internationally in the field of museums and archaeology. In 2006, the MFA transferred 13 antiquities to Italy and signed an agreement with the Italian Ministry of Culture that included the creation of a partnership in which the Italian government would loan significant works from Italy to the MFA. A result of this relationship is reflected in the MFA’s upcoming exhibition, Aphrodite and the Gods of Love. On view October 26, 2011, to February 20, 2012, it is the first museum exhibition of classical works devoted to Aphrodite (known as Venus to the Romans) and her realm. It features some 160 works from the MFA’s Greek and Roman collection and highlights 13 important loans—nine from Rome and Naples—including Sleeping Hermaphrodite, which has left Italy only once prior to this exhibition.