Unique among his peers at the vanguard of postwar American art, Cy Twombly (1928–2011) sought inspiration from ancient Greek, Roman, and Egyptian cultures. Throughout his career, he created thousands of paintings, sculptures, drawings, photographs, and prints inspired by the cultures of the past he encountered through his travels, reading, and collecting. Twombly wanted to demonstrate that “Modern Art isn’t dislocated, but something with roots, tradition, and continuity. For myself,” he wrote, “the past is the source (for all art is vitally contemporary).”

“Making Past Present: Cy Twombly” explores the artist’s lifelong fascination with the mythology, poetry, and archeology of antiquity and reveals how it shaped his creative vision. Ancient art manifests in Twombly’s work in often subtle, nonliteral forms and gestures. The exhibition looks at how he absorbed its spirit—the feelings and ideas it filled him with—and sought to evoke it in his singular modern style.

Work by Twombly appears alongside ancient Greek, Roman, Egyptian, and Near Eastern art from the MFA’s collection, as well as objects from Twombly’s personal collection of antiquities, which are on public display for the first time. The characteristic, often illegible handwriting that appears throughout Twombly’s paintings, drawings, and sculptures recalls the ancient inscriptions in stone on view. Marble sculptures of Venus interact with the artist’s mixed-media works that conjure the goddess’s physicality and sensuality through word, color, and form. Twombly’s paintings and drawings illustrate his ongoing fascination with his favorite Homeric hero, Achilles, and the Roman war god, Mars. These juxtapositions of old and new invite visitors into Twombly’s psychologically complex dialogue with the past, and illuminate how he pushed art forward in the 20th and 21st centuries.

Oil, wax crayon, graphite, and colored pencil on canvas. Photograph by Greg Heins. Promised gift of Ann and Graham Gund in honor of the 150th anniversary of the Museum of Fine Arts, Boston. © Cy Twombly Foundation.

In this lecture at the Getty Center, Christine Kondoleon, George D. and Margo Behrakis Chair, Art of Ancient Greece and Rome, explores Twombly’s lifelong fascination with antiquity—from mythology and poetry to war and memorials—and how it shaped his creative vision.

Edmund de Waal on the Joy of Cy Twombly

Artist Edmund de Waal is an enthusiastic fan of Cy Twombly and has studied and written about his work. In this interview with the Getty Museum, de Waal discusses his and Twombly’s shared appreciation for the fragment as well as Twombly’s obsession with loss and urge to write on his art.

Anne Carson: A Rustle of Catullus 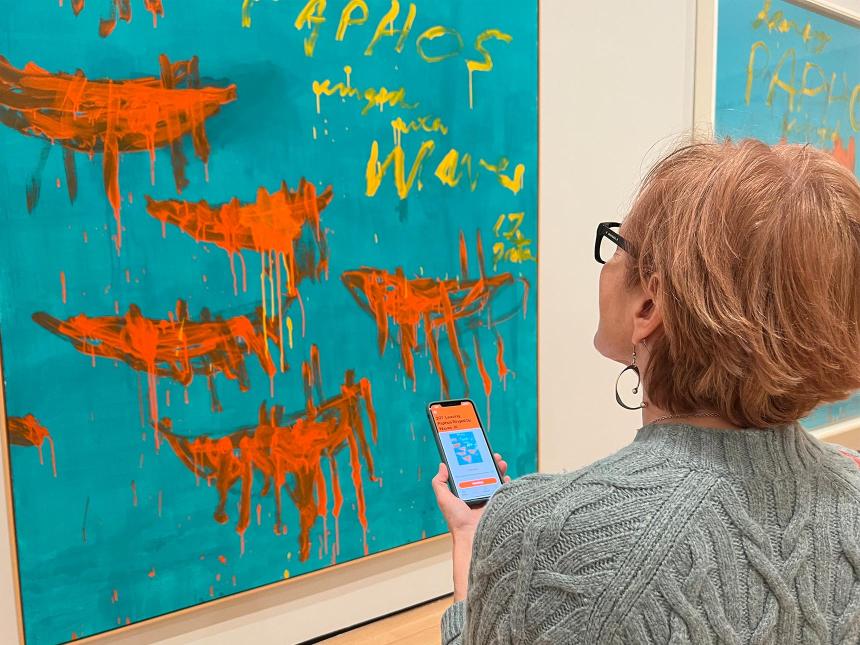 Hear from the exhibition curator, writers, and artists about Twombly’s provocative allusions to the past. Download the app onto your smartphone from Apple’s App Store or Google Play, or access it on the web. For the best audio experience in the galleries, remember to bring your ear buds or headphones.

Additional generous support from Amy and David Abrams, the Bafflin Foundation, and Lisa and Tom Blumenthal.

“Making Past Present: Cy Twombly” is organized by the Museum of Fine Arts, Boston, and the J. Paul Getty Museum, Los Angeles. The exhibition is supported by an indemnity from the Federal Council on the Arts and Humanities.