Conservation in Action: Juno, Restoration of the face, November 2012

Relocation and conservation of a Roman sculpture of the goddess Juno, early second century A.D.:
November 2012, Restoration of the face

The sculpture had undergone several phases of repair, more likely in recent centuries than in antiquity. This work included the addition of hands (no longer present), the head, and elements of drapery, toes, and facial features. While the head is carved from a marble which differs distinctly from the marble of the torso, it nonetheless dates to ancient Roman times. Much of the history surrounding previous restorations of the sculpture remains shrouded in mystery and requires further exploration and research.

The face of the marble head suffered damage to the nose and lips at an unknown point in time. During subsequent repairs, executed also at an unknown time, larger parts of the face were carved out to create smooth surfaces against which newly carved nose and lips were set. These fills were attached with metal dowels and removed at a later date, perhaps even before the sculpture came to Boston. Mortar was then used to fill the holes that once held the metal dowels. 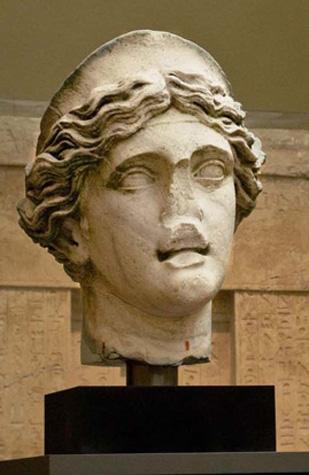 Due to the disfiguring nature of the losses, conservators, in consultation with curators, use modeling clay to sculpt a new nose and lips onto a plaster copy of the head. The shapes of these restorations are based on known sculptures of comparable date and size in other collections. 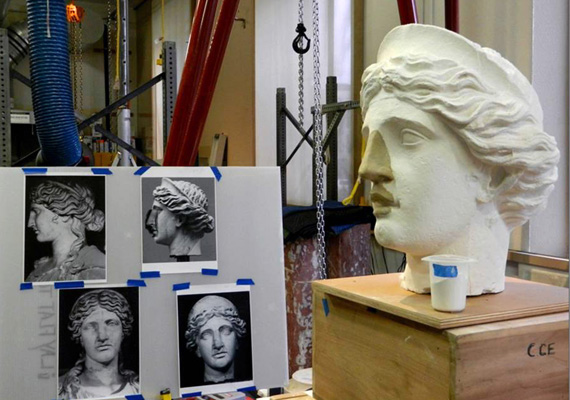 In order to assess how the reconstructed head would appear on top of the body when viewed from the ground, conservators prepare to temporarily mount the lightweight plaster copy on top of the torso. The clay restorations are painted white to simulate a full reconstruction. 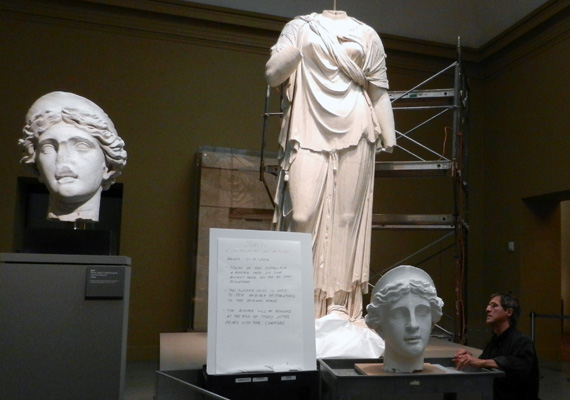 Red guidelines, painted onto both the torso and head when they were separated in December 2011, allow proper positioning of the copy. The marble surface is protected from the paint by a clear acrylic barrier coating, and after completion of this project, the coating and the red lines will be removed. 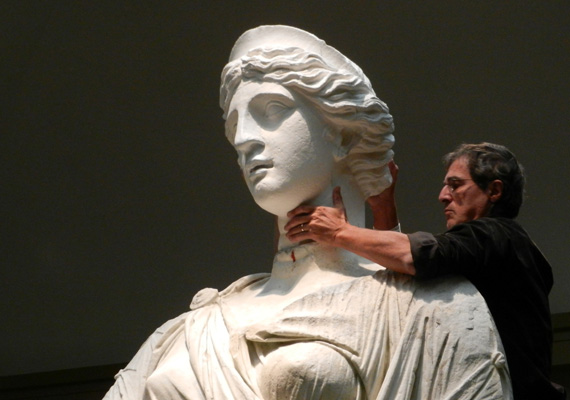 The restored copy of the head can now be used to cast the replacement nose and lips in plaster. The plaster elements will be attached to the head using the existing dowel holes as well as adhesive. Conservators will carry out this work off view in a conservation laboratory, but once the fills have been completed, the head will be reinstalled on top of the torso in the same position in which it was attached prior to its removal last year. The new additions to the face will remain removable should future generations choose to do so. 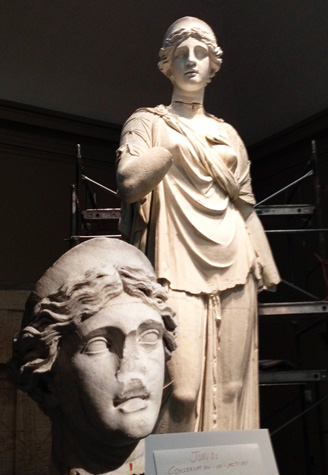